Manufacturer Description: Blasting into the new millennium at warp speed, “Noah’s Quark” boldly goes where no Box Figurine has gone before. This timed edition from the Millennium Series encapsulates what may be in store for the next 1000 years and comments on the past 1000. Within the interior, a hi-tech couple pilots the ship. They represent the 21st century ideal – casual yet ambitious – with hi-tech clothes and hi-tech bodies. Yet right behind them, animal mayhem conquers man and his machines. A robot, basing its judgement on its database, reaches the conclusion that the dog’s tail should be bobbed. Tubs the Turtle promptly pulls the robot’s plug. In cahoots with Tubs, a hare logs onto the Internet to find a site on dismantling artificial intelligence. Despite efforts to control and manipulate the cosmos, man’s best-laid plans can still be undone by nature. Below deck the couple’s genetically engineered supplies are stored. Tiny, helpless cattle and gigantic beets and carrots show the grotesque result of genetic manipulation. A disenfranchised lion reigns over potted plants and an artificial jungle. The fish is preserved as an exotic example of a forgotten species from a forgotten environment. A distraught pig looks over the scene. Some things never change, however. A cat still stalks its prey with usual disdain for human activities and Lord Byron still needs to sweep up. Down in the very bowels of the ship is an angel, now relegated below decks, no longer respected or needed now that humankind thinks itself the Creator. The fallen angel has taken up gambling with a wolf in sheep’s clothing. But on the outside of the ship is a glimmer of hope. Noah himself sits on a ledge of the spacecraft. He’s seen it all before and knows nature’s cycles will begin and end – a symbol of human endurance through the ages. 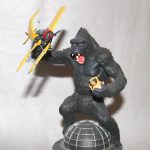 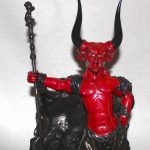