The history of 20th Century science fiction and fantasy had its origins in what are called pulp magazines, primarily published during the late 1890s through the 1950s, with their prime years being the 1920s and 1930s. Many of our favorite SF and horror stories originated in the pages of these magazines that were printed on cheap wood pulp paper (not meant to last the ravages of time; which is why they have the name, “pulps”). These magazines were low-priced mass marketed magazines not neatly trimmed like the magazine you are holding in your hands (or claws), and usually had sensational covers that would grab you from the newsstand and say, just like they did to Forrest J Ackerman when he was a 9 year-old boy in 1926 when he saw his first issue of AMAZING STORIES (Oct. 1926), “take me home, you will love me!” Most pulp magazines were 7×10 inches in size, 128 pages long, and often left both ink stains on reader’s hands and bits of broken off paper on their laps. In today’s thinking the pulps were very much like modern TV shows. Essentially, pop culture that was meant to be brief excursions into another time and place and not necessarily meant to survive the ages. Pulps were the successors of the dime novels and penny dreadfuls of the 1800s and the predecessors of modern superhero comics and all their descendants.

The first magazine in pulp format and the largest selling pulp of the time was ARGOSY that had a circulation of 700,000 copies per issue during its heyday in the 1910s-1930s. Around 99% of the readership of the pulps was male. Arguably, the most famous pulp magazine is the legendary, WEIRD TALES (started in 1923 and after several incarnations is still published today). Much has been written about that magazine and for sure much has yet to be written. The greatest of the greats were published in WT, such as H.P. Lovecraft, Robert E. Howard, Clark Ashton Smith, Frank Belknap Long, Ray Bradbury, Robert Bloch, and the list goes on and on.

However, one contemporary pulp magazine during Weird Tales’ golden age has received very little attention. This pulp is STRANGE TALES OF MYSTERY AND TERROR, a member of the Clayton Magazine empire, and abbreviated simply as STRANGE TALES (not to be confused with the Marvel comic of the same name that came out decades later). Few have heard of the STRANGE TALES pulp magazine for two primary reasons. First is these issues are very scarce, most difficult to find in any condition, and only seven issues were published of this magazine’s short run during the early 1930s. The second is most of the published stories are, unfortunately, rather dull and boring. Be that as it may, there are still some shining examples within the pages of ST of what was deemed scary in the early 1930’s. After all, this was right in the middle of the Great Depression and escapist entertainment was much sought after. And it was also the Great Depression that ultimately killed the ST pulp and since very few copies actually sold (25 cents per issue was a lot of money back then especially since most pulps were either 10 or 15 cents each) the publisher stopped the magazine after only 7 issues. The copies shown with this article are from my own collection.

The first issue of ST made its debut in September 1931 and featured a Hans Wesso (short for Hans Wessolowski, a famous cover artist of the day) cover painting of a scary looking python snake with human arms, based on the included story by Arthur J. Burks, “The Place of the Pythons”. Wesso did all 7 covers of this pulp’s run. Also in this issue are stories by Clark Ashton Smith (“The Return of the Sorcerer”) and Ray Cummings (“The Dead Who Walk”).

The second issue, dated November, 1931, featured a Wesso cover of a scary looking creature with webbed hands. In this issue are stories by Henry S. Whitehead (“Cassius”), Victor Rousseau (“When Dead God’s Wake”), and Arthur J. Burks (“Guatemozin the Visitant”).

The third issue, dated January 1932, features another Wesso cover, this time illustrating the famous werewolf story by Jack Williamson, “Wolves of Darkness”. Also in this issue are stories by Edmond Hamilton (“Dead Legs”), another Henry S. Whitehead story (“The Moon-Dial”), a story by August W. Derleth (a co-founder of the much beloved, Arkham House Publishers) titled, “The Shadow on the Sky”, and another by Clark Ashton Smith (“The Door to Saturn”). The last story in this issue is by the amazing prolific Hugh B Cave titled, “The Door of Doom”.

The fourth issue dated March 1932, features Wesso art describing “The Duel of the Sorcerers”, by Paul Ernst. In this issue are stories by Henry S. Whitehead (“The Trap”) and Francis Flagg (“By the Hands of the Dead”), a frequent collaborator with Forry Ackerman.

The fifth issue, dated June 1932, features a Wesso drawn cover of Hugh B. Cave’s story, “Stragella” (perhaps an early sign of ‘Vampirella”?). In this story, “the tragedy of the ghost-ship was being reenacted…”, an interestingly scary story that still holds up today. Also in this issue are stories by Henry S. Whitehead (“The Great Circle”), August Derleth and Mark Shorer (“The House in the Magnolias”), Robert E. Howard (“People of the Dark”), and Clark Ashton Smith (“The Nameless Offspring”).

The sixth issue, cover dated, October, 1932, has a Wesso cover illustrating Clark Ashton Smith’s, “The Hunters From Beyond”. Also in this issue are articles by Henry S. Whitehead (“Sea-Tiger”), Hugh B. Cave (“The Infernal Shadow”), and Frank B. Long, Jr. (“In the Lair of the Space Monsters”).

The seventh and last issue, cover dated January, 1933 sports a Wesso cover illustrating the Hugh B. Cave story, “Murgunstrum”, a classic in many ways. As stated on the cover blurb, “A Tale to Raise the Hair”, Murgunstrum is perhaps the most famous story in the entire 7-issue run. Also in this issue are stories by Clark Ashton Smith (“The Second Internment”), August Derleth (“The Thing That Walked on the Wind”), Henry S. Whitehead (“The Napier Limousine”), and Robert E. Howard (“The Cairn of the Headland”). 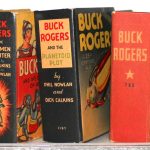 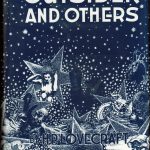 The Outsider by H. P. LovecraftLiterature