Air Wonder Stories and Science Wonder Stories were merged in 1930 as Wonder Stories, and the quarterly was renamed Wonder Stories Quarterly. The magazines were not financially successful, and in 1936 Gernsback sold Wonder Stories to Ned Pines at Beacon Publications, where, retitled Thrilling Wonder Stories, it continued for nearly 20 years. The last issue was dated Winter 1955, and the title was then merged with Startling Stories, another of Pines’ science fiction magazines. Startling itself lasted only to the end of 1955 before finally succumbing to the decline of the pulp magazine industry.

The editors under Gernsback’s ownership were David Lasser, who worked hard to improve the quality of the fiction, and, from mid-1933, Charles Hornig. Both Lasser and Hornig published some well-received fiction, such as Stanley Weinbaum’s “A Martian Odyssey”, but Hornig’s efforts in particular were overshadowed by the success of Astounding Stories, which had become the leading magazine in the new field of science fiction. Under its new title, Thrilling Wonder Stories was initially unable to improve its quality. For a period in the early 1940s it was aimed at younger readers, with a juvenile editorial tone and covers that depicted beautiful women in implausibly revealing spacesuits. Later editors began to improve the fiction, and by the end of the 1940s, in the opinion of science fiction historian Mike Ashley, the magazine briefly rivaled Astounding. 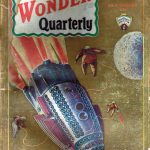 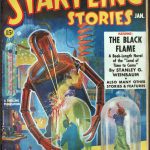