One of the current “hot” hobbies is scrapbooking. Stores like Michaels have row after row of materials catering to the scrapbook market. I know this because my beautiful wife (aka, The Bride of Markenstein!) is a pro at scrapbooking and knows the hobby quite well. The many volumes of scrapbooks she has assembled take up shelf after shelf attesting to her abilities and skills.

But, 50 years ago, back in the late 1950s and early 1960s the idea of a scrapbook had an entirely different meaning. For me personally, all of the monster business started in 1956 when I saw EARTH VS THE FLYING SAUCERS on the silver screen. That movie changed my life and firmly put me on the course I am still on today. Not long after that Harryhausen film I began to put together my versions of scrapbooks by cutting out various movie ads in newspapers and photos from the current monster magazines being published at the time. Well, recently, I made a journey into the hidden depths of my dungeon and managed to locate two of these early scrapbooks. It has been decades since I have seen them and it was a pleasurable trip down monster memory lane by looking at them again. Incidentally, I stopped putting together formal scrapbooks in the late 1970s when my day job (I’m a scientist) and the arrival of children dominated my life. For some of the pre-1958 movie ads in newspapers I remember getting these from piles of old donated newspapers at school. I kept the movie ad pages and later cut out the ads and pasted them in my scrapbooks.

I now cringe at all those early monster magazines I sacrificed by cutting out photos, articles, ads, etc to add to the pages of my scrapbooks. You may want to sit down for this because magazines sacrificed were early issues of FAMOUS MONSTERS, WORLD FAMOUS CREATURES, MONSTERS & THINGS, MONSTER PARADE, etc. By carefully looking at the backs of some of the glued in photos I can readily see covers from FM1-5, WFC #1-2, etc. Ouch! Even the cover to one of the scrapbooks has the letters “Monsters” cut from the cover of FM #4. At the time I thought this was the “best scrapbook ever!” Only from the eyes, heart, and mind of a 7 to 8 year old monster kid. Not to worry, however, since I cut up duplicate copies of these issues for my scrapbooks. I still have untouched copies of all the above issues in my collection.

As I mentioned I managed to obtain copies of a variety of film ads from newspapers way back when and carefully cut those out and glued them into my scrapbooks. Some go back to the late 1940s when ABBOTT & COSTELLO MEET FRANKENSTEIN was brand new at the box office. Also, when the Shock Cinema package was making its way around the country many of our favorite monster kid movies were being aired and TV ads announcing each one was printed. These too are in my scrapbooks. 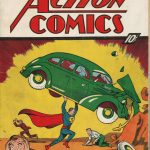